Johnson on verge of his 250th goal for Two Blues 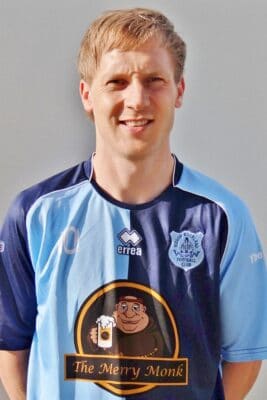 Bishop Auckland striker, Andrew Johnson, is on the verge of scoring his 250th goal for the club.

With Whitley Bay due at Heritage Park on Saturday afternoon (KO 3PM), AJ, as he’s more affectionately known, can, following his midweek brace away to Guisborough Town, which the Two Blues won 4-1, sink the Seahorses with goal number 250 in what will be his 297th appearance .

A long time coming, AJ made his debut at the start of the 2011-12 campaign, a season which would see statisticians reach for the record books as he bagged an impressive 48 goals in 47 appearances.

Having been the Northern League top scorer at the end of the 2012-13 season AJ was snapped up in the June by Darlington 1883 before  moving on to Spennymoor Town approximately six months later.

He returned to Heritage Park the following October and, in January 2017, scored his 200th goal in the famous Two Blues jersey.

“Getting 250 goals would be a massive, personal achievement,” began AJ.

“Scoring the 200th goal was the big one for me and the pressure around getting that goal seemed far greater than this time around.

“The press at the time, social media, and the TWEET from Alan Shearer added to that.

“In all honesty though I hoped to have reached that 250 mark well before now, but I have had a few big injuries during the last two seasons and it’s taken a bit of time to regain both form and fitness.

“Hopefully I can kick on again and get back to my best.” 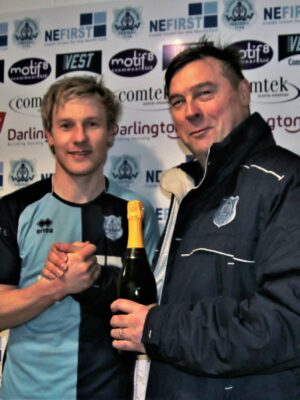 The past two seasons has only seen AJ score 29 league goals for the club due to ongoing injury issues so, his hitting that 250, or more, has, at times, seemed some distance away for the striker.

However, just shy of three years, and 87 appearances later, that landmark is in sight.

“To be honest at the time I never really thought about it,” AJ explained about the possibility of reaching the 250 mark.

“I was just over the moon to have achieved the 200 milestone, however, once I got into the 220’s, I did start to think about it a bit and hoped I would be able to get there.”

Now though, with that magical 250 in his sight, are his thoughts now looking at the next landmark and 300 goals, impressive at any level of the game.

“To score 200 goals for a massive non-league club like Bishop Auckland is something I’m really proud of, but to score 300, that would be the icing on the cake,” finished AJ.

“Only time will tell if I can get there but, as long as I can stay injury free, and have the support from the lads on the pitch, I would like to think that that landmark is achievable.” 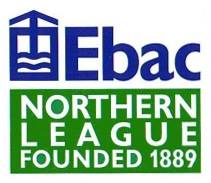